Cutgrip Mentality is one of my upcoming projects that is currently an animation concept that I haven't worked on more than just basic designs. Currently I want to finish up my partially finished projects before I move on to something new, however once Roadtrip is finished and SNARE ETA is back on a regular update schedule, I'll begin working on this animation 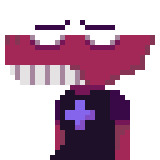 Cutgrip is going to be presented in the style of old 2D freeware games(primarily CaveStory). However, due to it being made in Blender, there will be 3D lighting and visual elements. I've also played around with the idea of Incorporating music video elements that specifically break the 2D angle, but I'll be fine tuning the specific feel of the project when I actually get to it. Also, a lot of the UI aspects have already been made for other animations, so that should save a fair amount of time for the post processing part of the animation.


So far, comparables include CaveStory, Petscop, Octopath Traveler, Undertale, and maybe a pinch of Jimmy and the Pulsating Mass.


UPDATE ON COMPARABLES: I just remembered that GarmentDistrict's "Of the Killer" games exist(link to the newest: https://gamejolt.com/games/bloodofthekiller/658029), which is very similar to the style of stuff I might want to incorporate in both this project and in general. The other inspiration I found was from DeadlyComics, both in general animation and also website layout. Check out his site! http://www.deadlycomics.com/